I've got to say I was nervous as hell going out biking this morning. I'm not generally comfortable in a setting with lots of new people. I would much rather hang with folks I know. Things like Deb's High School Reunion blow me away. I want to be more attached to her than my kids are to her during a nasty thunder storm right at bedtime. Once I get to know people, I'm good to go. So, it took a lot last week for me just to approach these guys, but I did. Today, I knew I'd have to go beyond meeting, to conversation and showing off my very new bike riding skills.

As soon as I got out of the car with kids in tow, one of the guys asked if I was going to ride. Okay, not to overstate the obvious, but I've got a bike on the back of my car and I'm dressed in spandex and a yellow bike jersey. Whaddya think? "Sure, If you're open for another." "Absolutely."

Knowing that these guys ride much faster that I normally do was intimidating too. It's also about the gear -- I was comforted to see at least two guys wearing street shoes (or so they appeared) with toe clips. Not everyone was wearing clipless. Ahh, I thought, there may not be a "C" group, but at least they're probably not all "A"s.

One of the guys asked me if I knew their route. No clue, so he gave me the low down, including Murray Hill. I was warned about Murray Hill. I've never ridden or driven it, but about three of they guys warned me. So I was prepared. For what, I didn't know, but I was on notice.

We headed out at about 9:15 and there were seven or eight of us. For the first mile or two, a few of the guys rode with me and we talked and introduced ourselves. I was pretty comfortable with the group. At about that point on a slight incline, I started to fall back. Not far, but not able to keep up. Over the first hill and down to the light, we were all able to cross at the same time, but on the next hill, I again fell back.

As I caught up again, Charlie warned me that Murray Hill was just around the corner at about the five mile mark. Charile was going ahead but he'd wait for me at the top of the hill. Murry Hill is a country road that runs about 7-8% for a mile or so. Just when you think your at the crest, there is a short flat portion followed by another 1/4 mile up hill. It's a bear, but I was doing okay -- slow but okay -- until I dropped my chain about 3/4 the way up. As I was fixing it, Charlie came back to check on me and I was able to ride the rest of the hill.

By this time, the rest of the group was long gone so Charlie rode with me. We hit some familiar areas and at one point he said that there was one nasty hill that he's had to walk. I thought no problem for me, even though I'm new at this, I've been able to tackle every hill I've seen since I got my new wheels. There is a very nice down hill leading up to this steep incline which would be great, except for the hairpin turn at the very bottom ensuring that you will get almost no help heading back up. This one slayed me. At about a 1/3 the way up the 3/4 mile slope, I started to walk. Honestly, I'm not sure my walking was much slower than riding at that point. As I got to the top, Charlie was again waiting and announced "17%". Wow, I don't feel so bad.

At this point, the "A" group caught up to us. Seems that they had taken a longer route and wound back around to where we were.

The rest of the ride was good, but I was pretty whooped so there wasn't a lot of speed.

When we got back, there were more we talked as we got our bikes ready to go and I definitely felt welcome. Can't wait until next Sunday! 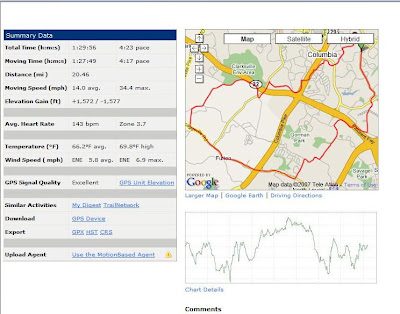 Seems like we both tackled some new adventures this Weekend. Great job getting out there and riding with the group.

Great job on the new adventure! It's always nice to have a riding partner!

I might take my kids to hebrew school just so I could ride with you. I'm sure they won't be the only teenage methodists in class.

glad you had a great time.