Let Me Tell You About Some Friends

When I started blogging, I found some folks out in blogland that I quickly developed a kinship with. There was Dan in New Jersey (Dan's blog here), Pat in Arizona (Pat's blog here) and Mike (Mike's blog here) and Jenny (Jenny's blog here) in Wisconsin. They were all bloggers and all had similar stories -- weight loss due to changes in eating habits AND exercise. Running in particular.

These folks became a virtual support system. We'd celebrate each others victories and support each other's disappointments.

Dan and I have run together a couple of times -- in Philly a couple of years ago and most recently, as part of the same American Odyssey Relay team. Next month we'll run the Marine Corps Marathon.

Pat is the uberblogger. Still out there blogging on a regular basis, always reading and commenting on our doings. He's also the king of the running events. Pat does 5k's, 10k's, all the way up to marathons. Currently he's on a quest to run in all 30 of Arizona's state parks. Nobody outruns Pat!

Mike and Jenny moved quickly from running to triathlon. They inspired me to get a bike when injury kept me from running a couple of years ago. They saved me from the dreaded elliptical.

Over the past two years, I have followed Mike and Jenny as they planned and trained. They struggled with training and with weight, but they persevered. Mike turned a fear of swimming into joy. What a couple of years it has been.

Yesterday, they both completed Ironman Wisconsin.

I am proud beyond words of Mike and Jenny. They have come so far and accomplished so much. I can't even begin to think of how difficult yesterday was and they persevered and they finished. (And, they signed up for next year!)

This morning I ran 18 miles and I'm feeling it. Do I dare complain? No. Mike and Jenny are feeling it a whole lot more!

Some day, the five of us will go for a run, together, all in one place, at the same time. Don't know where or when, but we will and it will be an event unto itself. There's nothing like a run with your friends.

It was kinda wierd starting off the day. Deb was off at her high school reunion and the kids were at my parents. Just me and the dog in the house. Might have been my first time all alone. When the alarm went off at 5:15, Andy was none too happy about me forcing him outside in the dark at that hour. It was pretty funny watching him waiting for me to go back to the bedroom to go back to sleep. None of that on Sunday.

At 6:15, I headed down to Annapolis with a couple of neighbors. Brian knew a shortcut to Navy-Marine Corps Stadium so we avoided the two mile backup to get off the exit. Saved at least twenty minutes, for sure. Everything is going great so far.

As the 7:45 race time approached, the air was getting thick and the temps pushed into the 70's, but the sun was hidden behind the clouds. Going to the starting line with my friends Dave and Jill, Dave mentioned that he was going to be pacing Jill at just under a 10 minute pace. I figured I'd see how long I could hang. 10 minute miles would be a best case scenario.

The run started on time, but it took us nearly 6 minutes to cross the starting line. Once we did, there was surprisingly less congestion than I had expected. Just at the start, I heard my name called out from the sidelines -- it was Barry, one of my cycling friends (see the Lancaster Covered Bridge report) who came down to cheer on another friend of his.

As we left the stadium lot, the course headed first toward downtown Annapolis -- the state house building, followed by the waterfront. At the waterfront, about mile two, the sun finally arrived, much to my disappointment. I was still hanging with Dave and Jill, but it was getting tougher to match their 9:40 pace, so I dropped back.

We passed the Naval Academy and headed over the Severn River bridge with it's steep elevation, followed by a long downhill grade, followed by a longer, steeper climb at about mile 5. At this point, the heat, humidity and pace had taken a toll as I walked through a water station to the top of the hill.

The next few miles were through some beautiful neighborhoods with plenty of folks out to cheer us on. Some even set up some makeshift refreshment stops: water, oranges, sprinklers and beer. Yes, beer! Not quite ready for that at mile 6!

Through mile 6, I was still at a 10 minute average pace, but a half mile down hill, leading into an uphill return ended that run. It was great to see some runner friends going the other way as I headed down hill. Lots of shouting out to the crowds.

As the course left the neighborhoods of Annapolis, we returned over the Severn River and back toward the stadium. The constant ups and downs took a lot out of me, but I was able to kick it up a notch in the last half mile with a final sub 10 minute split.

After two did-not-start's the previous two years, finally, I crossed the finish line. I felt different than I had for any other event. For the first time, I truly felt like a middle-of-the-pack runner. I did great on time, finishing in 1:43:26, a pace of 10:21 and there were more than a thousand runners finishing behind me on a very humid day and challenging (hilly!) course.

Unlike other events, the A-10 hands out their premium only after the finish. Quite a sweet long sleeve zip shirt. 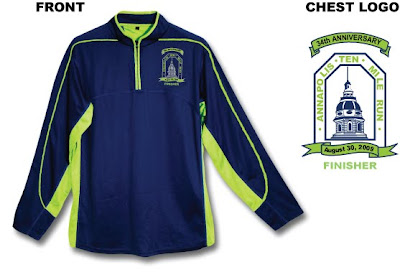 After I picked up my shirt, I headed over to the finishers area for water and snacks. During and after the run I ran into many folks from just about every facet of my life including a couple from my morning boot camp, at least a dozen Team In Training friends, Katie, a blogger friend who was manning a couple of water stops, my neighbors that I came with, Barry, that I mentioned earlier and, of course, Dave, Jill, Stacey and Scott, who were there when this whole running thing got started three years ago.

I can't begin to tell you how cool it was to feel so totally imersed in this running community.

For their part, the Annapolis Striders put on a fantastic event. Plenty of water and Gatorade stops, tons of volunteers, great swag, including an icy towel at the finish. I've got June 1, 2010 on my calendar to sign up for the 35th installment.