When Pedal and Paddle 2009 was announced, I immediately added it to the calendar. This is one of the most unusual events I've ever heard of. Our local community, Columbia, MD, has 23 outdoor pools. The idea is to start at one pool, cycle from one to the next and swim a lap (out and back) at each. If there is a slide, we slide, too. It's not an event for the feint of heart -- the roads are all heavily traveled and the distances range from a mile to 5 miles between.

Deb asked a few weeks ago when I was going to do some training laps. Hmmm, how about not. I did laps last August. I'm pretty sure without any actual instruction that the laps wouldn't help much. I'll just suck it up and go.

The weather was about as perfect as it could be -- temps in the mid-80's and dry. I pulled into the Dasher Green pool lot and saw far more people that I had expected. Turns out there were about two dozen, double the best year ever, and far more than the five that rode last year. Ed made some announcements, gave out some swag from the charity that we were supporting -- The Ulman Cancer Fund -- and we were off just after 10 am.

It must have been quite a sight to see this paceline with so many riders in the middle of town. We ticked off the first group of pools pretty quickly, but a long red light split us up. Then the trip out to River Hill, the farthest ride between pools to and from, further segregated the group.

One of the leaders, Lou, had boasted last year that he wasn't ever last in the swim as he had been in the past. I took that title. Unfortunately for me, I had improved little over the year since. The onslaught of new riders this year were triathletes so I continued to fall behind in the pool.

As we crisscrossed Columbia, we'd all pass each other and there was definitely a sense that we were together, just not all together.

At number 14, an oasis appeared -- a 7-11. Our one and only refueling stop. At this point, the group rejoined and checked out the goods. There we were out in front of the 7-11 eating just about all the crap we could. I laughed to myself looking around -- hot dogs, candy bars, soda, pop tarts, you name it. Lou gave Jill a hard time for eating healthy trail mix. Personally, I went for the pop tarts. For the first time in at least three years, I downed a couple of my once favorite brown sugar cinnamon pop tarts. Ya know, they weren't nearly as good as I had remembered!

After the 7-11 break, we headed as a group to Dorsey Hall, my home pool. Deb and Matty were there awaiting our arrival, camera in hand. She had also prepared some goodies for me. Had to disappoint her -- sorry, love, I'm stuffed!

From Dorsey, we hit each of the remaining eight pools in workmanlike order. The group traveled together as a peleton, pulling into the last of 23 pools just after 4 pm. I was not last in the pool, but was last out, securing my second lanterne rouge title in as many years.

What a day! 1350 yards of swimming, 46.5 miles on the bike, 45 transitions, and a perfect day for it all. It was great to see and ride with some friends that I had never ridden with before: Scott, Stacey and Jill.

Thanks to Ed and Lou for pulling this all together! Can't wait till next year. 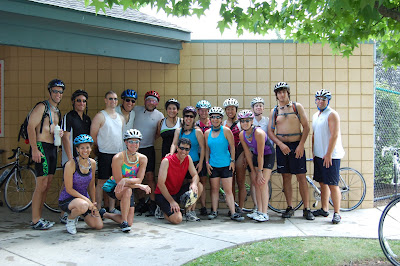 Since then, I've run more than 1,600 miles and cycled 1,900+. Not to mention the dozens of spin classes, Body Pump's and boot camps sprinkled in amongst it all.
In the last year, I have struggled with my weight. Although I've dipped as low as 218, I've also gone as high as 238. Most of the time, I've been in the 220's, including today's weigh in at 228. I'm disappointed with my lack of progress here, despite all of the other successes. Still about 30 pounds from that elusive goal. Still, down about 190 pounds is an incredible feat.

In a way, it's hard to believe it's been three years. It seems like just yesterday. In another way, it feels like I've been leading this healthier lifestyle for much longer. I also think of myself in a different way. My mind has finally started to catch up to my body. When I close my eyes, I rarely see the old fat guy.

To celebrate this anniversary, I'll be joining some others for the 4th annual Pedal and Paddle event. That's 23 pools, one lap each, biking from pool to pool, about 45 miles, give or take.

Time to focus. Could it be that the Marine Corps Marathon is less than 16 weeks away? Guess I better get a move on a plan, then.

Last year for Frederick, I used the Higdon Novice 1 training plan. Bumping up to the Higdon Novice 2 plan this year with a modest increase in mileage. Now I just need to get myself situated and start to log the miles. I'm pretty close to on plan. Been running, just not on a formal plan. Until now.

I'm excited to be running again with Team In Training. It was evident a year ago that Team In Training does a great job at training athletes to run marathons, among other things. Not to mention the billion dollars (yes, with a "B") that they've raised to fight leukemia and lymphoma.

I was amazed as I talked to people last year how many had been impacted by leukemia and lymphoma. I met survivors, loved ones of survivors and, sadly, friends and family of those who had been taken by these cancers. This past spring, I read about a 40-year old guy named Andy. Andy and I crossed many paths, just a few years apart. Andy was diagnosed with acute myeloid lymphoma, a very aggressive cancer. Within weeks, he lost his battle. This hit me hard. There has been so much positive news. So many survivors. I know in my heart that Team In Training has made a difference for may of them. What I now realize is how much more work there is to be done. Running again with Team In Training was an easy decision. 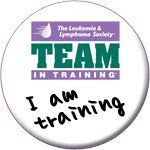 I've set a goal to raise $3,000 to fight these blood borne cancers. If you donated before, please do so again. If you haven't, please consider doing so. Even if it's just five or ten dollars. Every penny counts! You can click here to go to my fundraising web site.

Thank you and keep tuned here to check on my training progress!

Still nothing new on the job front. A couple of luke warm opportunities out there, but nothing to get too excited about. On to the good stuff. . . 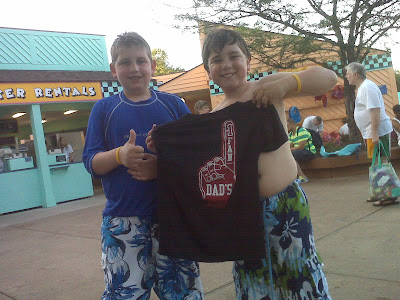 Last week, we took a family trip to Williamsburg, VA, leaving on Father's Day morning.
What a blast! A day and a half each at Water Country USA and Busch Gardens. The kids were amazing -- we went on every ride at Water Country and just about every coaster at Busch. (Well, ONE of us went on every coaster. Zach opted out of The Griffon and Matty did the coasters without loops.) Needless to say, we left wanting more. Our one day at Colonial Williamsburg was a bit of a bust. Kids lasted about an hour before looking for an out and Deb and I weren't far behind. 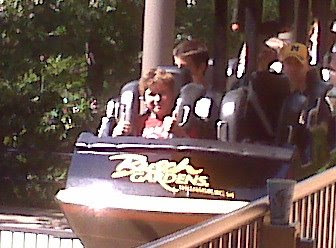 June turned out to be a pretty amazing month for physical activity.
58 miles running, just a bit under my goal for the the month. I had planned for an off month after a fairly high mileage prior three months. Now begins marathon training in earnest with Marine Corps just over 16 weeks out.
My bike has been busy. Without a doubt, my highest mileage month ever at 342 with an average of 38 miles per ride. I can truly feel the changes in my biking ability. I've tackled just about every major climb in my area (other than the dreaded Illchester Rd -- 9/10 mile at 18%!) I've gotten over any paranoia about the climbs and am even hitting them on my own (without peer pressure, that is.)
As for diet, I'm down a bit from my last report. Still running in the upper 220's, but that's a lot better than the upper 230's. Just trying to control the snack bug that I've picked up as well as not over indulging on long run/ride days. Need to bank those calorie burns rather than consume them.
L'Chaim!
Posted by Jeff at Wednesday, July 01, 2009 5 comments: