I've written at least a dozen posts since my last one two months ago. Unfortunately, they've all been in my head.

So much has happened since then.

We're Texans now. I guess that's what you'd call us. We did the big move the first week of July and we were in our house on 7/7. Housewise, it was a rough start. We had to replace an air conditioning unit, our water was shut off by the town, our dishwasher was broken. . . then it wasn't. Shortly after that, our 10 year old mini-van died, so we replaced that. Somehow I was thinking that the cost of living would be cheaper out here, but not so far.

We've partaken in quite a bit of the local cuisine. Barbecue, Mexican and Italian have led the way. Not exactly cuisines known for helping dieters . . . diet! But we've all enjoyed it.

With all of the activity related to the move, there wasn't much activity of any other kind. Not that I didn't THINK about exercise (as I was stuffing my face), but it just didn't get done. Looking back on June, easily my least active month if four years -- one bike ride, no runs. Sad.

Inactivity continued through our drive west. My running shoes made the car trip. They just didn't see any pavement.

I was starting to feel that out-of-control old me. Eating whatever and whenever I wanted. No attention to feelings of actual hunger. Mostly drinking diet sodas and coffee, not much plain water. My waist line was clearly expanding. I could no longer shove my belly into the old 36's and 38's that I had been wearing for the past few years. I made a sad trek to Kohl's to buy some Dockers so that I'd have clothes for a business trip. Size 40. Then, a couple of pair of jeans at Costco -- 42's. (No pride here. . . Deb and I joked that I'd need to be sure to wear a belt, lest the Costco label be evident to all. What the hell, they were twelve bucks a pair, and a temporary solution, I swear!) 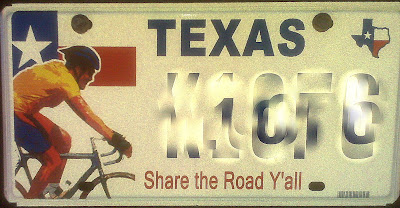 One of the things that excited me about this part of the country was the opportunity for year-round cycling. As I drove around town during the first week, I'd see cyclists riding and schvitzing in the mid-day heat. I started to crave a ride. And what could be bad about a state with a kick ass vanity plate like this one -- now on my car!

One of my new co-workers, a guy that I had known from my old company who knew me only as Fat Jeff before my first visit to the new company, is a cyclist. We had talked about riding together. I really needed to ride. Finally, on July 11, we hooked up for a ride. Ahhhh.

For our first ride, we did a loop around DFW airport. For 15 miles, I kicked Brian's butt. Then the heat hit. (Or maybe I went out too fast.) (Or maybe it was the extra layer of blubber I was carrying) . I wasn't sure I'd make it back to his house. Alas, the last seven miles were ssslllloooowwww, but we made it.

Since then, I've been riding. A lot. A couple times a week in the early morning. (I knew those lights I bought a couple years ago would come in handy some day.) Long on Sundays with Brian. Even the scale is moving in the right direction. When I'm not riding, I'm thinking about riding. When I'm driving, I'm thinking about whether the road would make for good cycling. When I ride in the morning and see someone riding in the afternoon, I'm jealous.

A few years ago, I came across an ad for a ride called the Hotter 'N Hell 100. It held at the end of August in Witchita Falls, TX. As the move became evident, the ride crept up on my radar. A few weeks ago, I had totally written off the event for this year. Deb continued in her roll as biggest supporter and kicker of my ass, saying I was nuts to write it off, there was plenty of time. After the past week, not so fast. Hoping that Brian will go too. Would still like to drop at least 20 pounds before then, but things are going in the right direction.
So, that's it for now. More reflections on Texas to come. Soon, I promise!
L'Chaim! Y'All!
Posted by Jeff at Thursday, July 29, 2010 8 comments: