In 2007, Runner's World rated the Annapolis 10 Mile Run (A10) as one of the Six Big 10-Milers To Run. It's an incredibly popular run that fills all 4000+ spots in under a week. The run starts and ends at Navy-Marine Corps Stadium and is supposedly a beautiful, tough run.
That same year, I signed up for the run and fretted about being able to make the strict two hour time limit. That didn't matter as I wound up sidelined due to plantar fasciitis and doctors orders not to run.
In 2008, I signed up again. I was less concerned about the time, but I knew I'd be within a few minutes of the cutoff. Shortly after the Frederick Marathon, foot and ankle issues sidelined me once again.
Undeterred, I signed up once again this year. It's been a healthy summer of running and in less than half a day, I'll start and finish my first A10.
Other than Frederick, this is the most excited I've been about a run. I'm looking forward to seeing lots of friends. Finishing the run onto the field where our Midshipmen play ball just gives me chills.
With that, it's time to try to get some sleep. Race report to come.
L'Chaim!
Posted by Jeff at Saturday, August 29, 2009 4 comments:

A couple of Sunday's ago was the Lancaster, PA Covered Bridge Bike Ride, a 100k (62 mile) event. This was a late addition to the calendar for 2009. I had planned to ride the St. Michael's Century in September, but they nicely scheduled the ride for Rosh Hashana. Time for plan B.

One of my Team in Training group mentioned this ride about a week before, so I put the word out to my Sunday riding group. Barry, his wife Lisa and another friend, Dan, were already planning to ride and they had room for one more. I was in!

We hit the road early and, after heavy traffic into the event, we were on our way by 9 am.

It's pretty easy to change terrain within an hour or two from home. In 90 minutes, we could be riding on flat-as-a-pancake eastern shore roads. Based on a conversation I had with another friend, I thought this was going to be pretty flat.

Wrong! The hills were different than the local roads -- less steep, but longer climbs.

Though I was concerned about keeping up with the group, I felt great getting out there and alternated throughout the day with each of my three rider friends.

The course was very crowded with a record 4,000 riders for the three distances. At times, the most difficult part was dealing with some of the novice riders who didn't understand what "on your left!" meant. (Not kidding -- a couple actually were heard saying "why do they keep saying 'on your left'". Oy!)

The weather was just about perfect. Well, rain would been worse. The forecasted low 80's was only off by ten degrees. It got pretty brutal out there toward the end of the ride.

So enough of the whining. The ride was a blast. The roads were crowded with Amish wagons as well. Of course, the Amish vehicles are horse powered. Good news was we all managed to miss the horse poop covering the roads. (I can only imagine hitting one of the poop patches and, if you manage to stay upright, you'd be riding with the poop smell for the rest of the ride.) The scenery was fantastic. Six covered bridges. Lots of farmland. Even Floyd Landis' parents house. 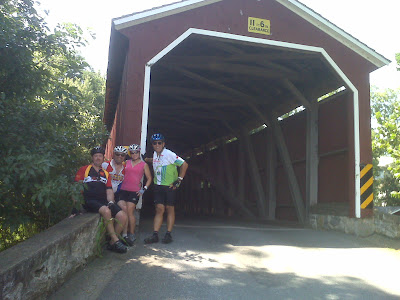 As we finished the ride at nearly 3pm (the time I had said that I'd be home -- I mean MY home), we were pooped from the long hot day. We averaged better than 15 mph for the 63+ mile ride, which turned out to be about 80% as hilly as our home roads.

On our way home, we hit the Plain and Fancy Restaurant, one of Barry and Lisa's favorites. This was a meal that took me back to days of old: fried chicken, sausage, roast beef, pot pie, mashed potatoes, iced raisin bread, apple pie. Oh yeah, they did have green beans. . . drowned in butter! What a meal! I figure the day was about a push in the calorie department.

All in all, a great experience. The Lancaster Bike Club did a great job putting the event on. Riding with Barry, Lisa and Dan was great. I'll be sure to sign up early next year!

I was reminded a few days ago that I haven't posted in more than a month. It's not that I don't have anything to say, it's just that I haven't said it. What that means is that my mother has no idea what's going on with me. (Mom, you can thank Ann Marie for looking out for you!)

The summer seems like quite the blur. Kids go back to school in just a couple of weeks. I'm wondering where all the time went. 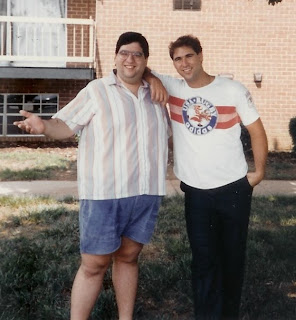 Last week, I visited the Baltimore Ravens training camp at McDaniel College. I went to McDaniel (then known as Western Maryland College) for five semesters from 1982 through 1984. They were fun years . . . too much fun for me, which I why I ultimately transferred and graduated from a different college. I had a tough time finding a picture that I could post without doing a bit more self incrimination that I'm prepared for, at least until my kids are, say, 40 or so. The picture to the right is me and Chuck. (I'm on the left, in case you weren't sure.) It's from 1984.

Anyway, it was neat to go back on campus. Oh, the memories.

While I was there, I saw some old friends that work at the college now -- George and Robin Brenton. They were great friends. We'd lost touch a bit over the years, except for holiday cards, but seeing each other brought back some more memories.

There was the time that Robin, another friend Mike, and I had all failed Dr. Rosenzweig's Calculus test. In fact, the whole class failed the test, except for a couple of brainiacs. He agreed to a retest -- at 7 pm on a Friday night, following the lacrosse game against our arch rivals -- Gettysburg College. Not a good combination in the days when the drinking age was just 18. Anyway, if I recall correctly, I got a D+ on the retest, Robin a D and Mike a D-. That was when I decided it might be best to change my major from math to economics. 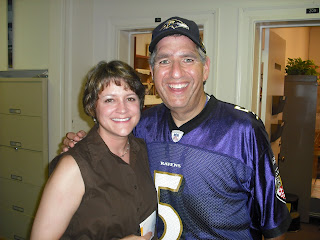 It was great to see them. I also ran into a few other friends that day from different parts of my former life just up to see the Ravens. It was a pretty neat day.

Today, Deb pulled out a couple of plastic bags full of hats. She wanted me to go through them to see what we could yard sale or donate to Goodwill. Once upon a time, I collected hats. You see, when ever I would travel, I couldn't buy a t-shirt. It just wouldn't fit. So I bought hats. Must have gone through 50 hats today. At least half a dozen still had tags on them! Wonder if we can sell the for retail at the yard sale.

So there you have a couple of tidbits. I've got another post coming about the Lancaster Covered Bridge Ride, but that's another day or two away and I didn't think I could keep my mom waiting any longer.
L'Chaim!
Posted by Jeff at Tuesday, August 18, 2009 4 comments: