Time for a little update.

The weather in this part of the world has finally broken. The grass is as green as I've ever seen it and it needs mowing twice a week.

Good news is it's perfect for outdoor activities. With all makeup games from the spring rain we've had plus a Memorial Day tournament my youngest is playing in, we're spending most of our non-school hours at the ball park.

It seems like twice a year I go through this catharsis between running and cycling. The crappy spring weather kept me on my feet and I truly learned to love running in the rain. (No, I say NO, the cold and snow are NOT close behind!) A few mechanical issues with my bike left me a bit skittish and a ride a few weeks ago where I felt like I was spinning in concrete left me thinking I wouldn't get too many bike miles in this summer.

Alas, the catharsis has occurred. I could only dodge my biking friends so much. Last week and this, I rode with Frank, one of Zach's baseball coaches. Frank and I are perfectly suited, about the same pace. Only difference is Frank just likes to ride. No odometer on his bike. Just a watch on his wrist. Just like those runners who go run without an ipod, without a GPS. Not me, boy. I record every hundredth of a mile. Always want to round to the next nice neat quantity, too. I'll never be one of those people that just goes to go. If I don't record it, well, did it really happen?

My neighbor Kirk called me to ride on Tuesday. We headed to the BWI trail and, despite a five mile accidental detour (must remember, left on Wright), we knocked out 44 miles. This was the one that got me really sucked back in. Despite the lack of spinning during the winter months, I could feel the difference that Body Pump and boot camp have made. I felt much stronger and handled the hills on the way home much better than the two times I rode the route last year. Can't wait to get back out there.

Still running, but not as much. Next weekend is the Maryland Half Marathon, so after that, I'll dial back the running a bit until marathon training gets hot and heavy over the summer.

As for the job thing. Well, honestly, it's been a struggle. Still not a whole lot of responses. Some days are an emotional roller coaster. Opportunities that seem to be a slam dunk for at least a phone call wind up in the "thanks, but no thanks" pile. More often than not, an application is filed on the internet and winds up in the abyss. At this point, I'm considering some other options to the same thing I've done for the last 20 years. The market is tough. That's out of my control. Need to get some good news. Even a nibble.

The roller coaster has taken me on a small hit to the scale. Over the past month or so, I've trended into the mid 230's. Though I had bottomed at 218, I've spent most of the past 6+ months in the 220's. Need to get the snacking under control and stop the emotional eating.

I know what needs to be done. It's time for action.

Thanks to all that have offered help on one or more of these fronts. Just gotta keep workin' it!

Back to the scene of the crime. Lot's of thoughts of last year's full marathon. I'll try to keep this down from my seven part race report from last year!

In the days leading up to Frederick, I was not feeling into it. Maybe the result of a bit too much running. This would be my third half in nine weeks, plus the relay from just a week ago. Total mileage run during race week: two. On Friday at boot camp, I felt a nasty pain in my left knee. Not good at all. Couldn't even eek out a mile on the track. My plan was to go easy and get to the start line. Whatever happened happened.
Saturday night was the big Team in Training Inspiration Dinner. This is a huge deal for the first time runners and their families. Lots of pasta, bread and excitement to get ready for the big day on Sunday. It was exciting to see Cherrie, my mentee with her family, as well as others that I had gotten to know during our training season, like Risa (whose pictures I've shamelessly stolen to post here), Joe and others. 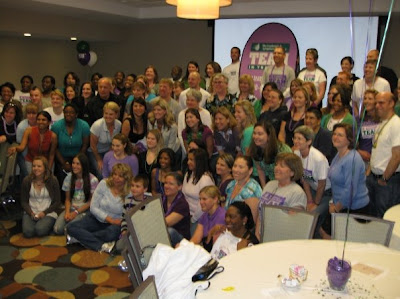 The Team raised over $150,000 this season through the efforts of more than 80 participants. Awesome. 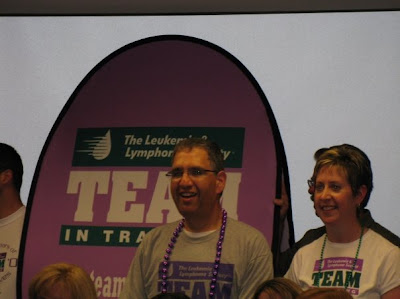 Risa was one of the top fund raisers this year. Way to go, running bud!

After the big meal, I headed home to try to get some sleep. The big question, other than the knee issue was the weather. Forecast was for rain -- go figure -- it's been that kinda spring.

I woke Sunday at 4:15 and immediately heard the drops pounding on the window. Great. 3 hours of wet. By the time I left the house, the rain had subsided. For how long, no clue. I stopped at the Dunkin Donuts for a coffee and headed west.

By the time I got to the fairgrounds, it was after 6. As usual the port-a-pot lines were long and slow. It didn't take long to figure out that getting to the start by 6:30 would be tight and I was right. I hit the starting line just a couple of minutes late. Too late to catch the 4:30 pace group (2:15 half marathon pace) that I had planned to run with.

So, we were off. As we ran through downtown Frederick, everything (my knee) felt right. It was dry, but I wasn't feeling great. Nothing I could pinpoint, just felt like it would be a tough day.

A mile or so in, I came upon Risa and Margaret. They looked great. Very excited, I could tell. We chatted for a couple of minutes and then I found myself pulling away. They'd do great. Keep it up, ladies.

A few more miles in, all was well, and I was on a pace of just about 10 minute miles. In my mind, I kept thinking about walking. My body felt heavy. Maybe it was the "a bit too creamy" dinner from the night before weighing on me. I kept going.

Around mile 6, I saw Cherrie. She was doing great. She had started at 6am with a large group of TnT walkers and she was all smiles when I saw her. Here, I slowed to a walk for a few minutes so we could chat. It would be a great day for Cherrie. I left her and started to run. That break was what I needed.

Finally, at mile seven, the long awaited rains came. None of this misting, it was raining. No problem though. Just keep going. 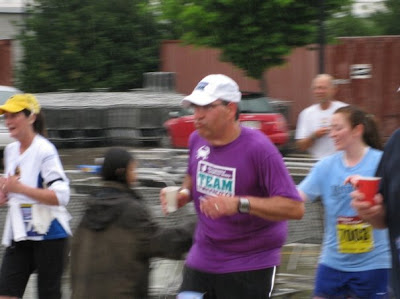 Who's the dork? The Wal-Mart water stop, mile 9.
As always, the TnT support was amazing. You couldn't go anywhere and not see a purple shirt. I even remember Karen from the exact same spot a year before at mile 11. TnT shines on race day!

The course seemed hillier than last year, though the roads were the same. I suspect that I forgot about the first half rolling hills compared to the nastiness ahead for the full marathon runners. Even that last half mile up a gradual hill seemed extreme. Nevertheless, I was able to run the rest of the way from the time I left Cherrie to the finish.

I looked down at my Garmin and saw what I could hardly believe. Despite the knee worries, the not feeling great, the 6 miles of rain and the walk break, there was a personal record. By 8 seconds! 2:17:56. Yeah, I planned it exactly that way, to shave a half second a mile off of my DC run five weeks before.

Time to go check in with the TnT'ers. Everyone was in wet, but great spirits. No problems, just lots of great running. Risa came in all smiles. Cherrie was ecstatic. You couldn't tell that the sun wasn't shining by checking out the TnT tent. Way to go, all!

I got home and took a luscious 2 hour nap. Thanks, Deb!

No rest for the weary, the fall TnT season start Saturday!

The Relay, In Sequence

I've resequenced the relay posts so that they read in order.

This LINK will show only the recent relay posts. Hope you enjoy the race report.

The press clippings where our team is mentioned are HERE and HERE.