One Size Doesn't Fit All, Part I 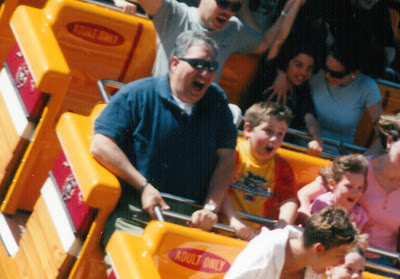 When I was a kid, I loved roller coasters.

On my first visit to Disney World in 9th grade, my brother and I rode Space Mountain like 12 times in a single day. I have fond memories teenage trips to Hershey Park, Kings Dominion and Busch Gardens, riding all the rides and most of the coasters. Even the Wild Mouse on the boardwalk in Ocean City, MD was an occasion to look forward to.
What I found out as I continued to grow horizontally is that they don't make those coaster seats quite big enough for big guys.
My love of the roller coaster and amusement park rides in general seemed to wane in direct reverse relationship with my bodily width.
This never bothered me until kids came along and then started to grow. About 4 years ago, we took a trip to Dorney Park, north of Philly. We went primarily for the water park, but as we walked by the adult rides en route to the kiddie rides, I noted that some of the ride signs had warnings on them. Something to the effect of:
No Pregnant Women, No Heart Conditions, and
DEFINITELY, UNDER NO CIRCUMSTANCES, ARE FAT PEOPLE ALLOWED!
Well, that might be just a slight exaggeration, but the warning was to me to be heeded, and so I did. That warning sure did save me from the added humiliation of trying to get into a seat and failing the test.
On this trip, not being able to ride rides was not an issue. The kids weren't quite ready for coasters, but I knew that the time was near.
In December 2004, we made our first trip to the Magic Kingdom. Thankfully, I was at a point where my weight was down due to one of the company weight loss contests. I was able to ride Space Mountain and the Wild Mouse a few times. It felt really good to get on those rides. The rides were tight, but I knew how to suck in my gut far enough for the close to latch.
Unfortunately, my part of the trip was cut short by a kidney stone, which relegated me to bed for three days on some really good pain meds.
In order to make up for lost time, we planned to return in November, 2005. By then, my weight had also returned.
Although we did do a few park days, there would be no riding for this big guy.
Cut to 2007 . . . Deb and I went out to Vegas for our anniversary. Although we had been before, our goals were different this time. For one, we wanted to enjoy our food, not just eat mass quantities of it. (More on that trip in a later post.) Anyway, our hotel (MGM) sat right across the street from NY, NY. Right outside is their roller coaster, winding it's way along the facade of the hotel.
On our last full day, I finally told Deb that I'd like to ride it. She was fine with that and encouraged me to go. . . alone. There was shopping to be done, after all! So I did. I got in line and, in my head, got out of line about 6 times. Would I fit? If not, how would that affect my mind with so much positive going on.
Well, I didn't get out of line. After about a half hour wait and a $12 charge, I got into the seat and I fit! Just a slight breath in and the bar was locked. Now what? I guess I'm stuck now. And away we go. . .
Two and a half minutes of screaming through a loop-d-loop and a corkscrew along The Strip. It was AWESOME.
A week or two later, Deb had received an e-mail from one of 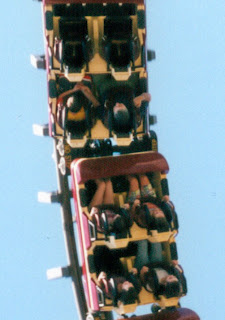 the parents at school offering discount tickets to Hershey Park. I don't think Deb got the words out before I told her to put our order in. In April, we were off to Hershey for an awesome day of rides and fun. I rode every coaster in the park except one. (I was not quite petite enough to fit in the Storm Runner seat.) Well, maybe next time! What was even better, was that my oldest rode all but one of the ones that I rode and Deb and my youngest rode as well. It was a glorious day of fun in the sun.
Picture -- upside down on the Super Dooper Looper, my son and I are in the second position, I'm on the right. (Picture credits to Deb! Nice!)
For his birthday, my brother and I are taking Dad to Kings Dominion for a guys day of riding coasters. BRING IT ON!
I've read in some other places things like this described as NSV's -- non-scale victories. There have been many of them and this is just one more in the path to normality.
L'Chaim!
Posted by Jeff at Wednesday, June 06, 2007

What a great NSV to celebrate! Isn't it amazing to rekindle a love you had as a youngster! I'm happy for you that you are able to enjoy coasters with your family.

I know where you are coming from with this post. I am a large man (380lbs) and took my family to Orlando in Jan 2007 for the first time ever. I was disgusted with myself when I could not fit into any of the rolling coasters. Any of the rides with the contoured seats I could not do because of the size of my butt.

Well we are going back this year and I am actively trying to get at least some weight off to at least try a few of them.

I will keep going back until I am able to ride EVERY ONE of the coasters. If we see one I want to be on it.