The scale was not positive this week, but I wasn't surprised as I knew there were some higher days in the middle part of the 15 day average. The average was up 0.8 lbs at 258.4, but I've been running below that range recently, so the trend should be back to positive next week.

Now that the race is over, it's time to focus on weight loss again, with an effort to drop to 239 by year end. It can be done!

Total mileage of 13.6 this past week. None on the bike as I blew off the Sunday ride yesterday. Just two weeks until the Lance ride! 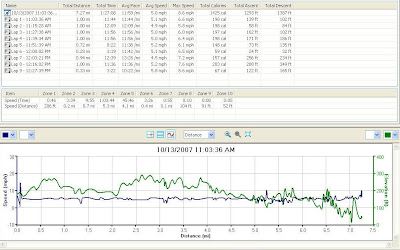 I went back into the archives to pull out my time from the Pikes Peek 10k in Rockville, MD. That race was on 4/29 and was the most painful and longest race I had ever done to that point. My time was 88:50 for 6.21 miles. In 5 1/2 months, I dropped my average mileage from 14:18 to 11:59 -- I added a mile and took off a minute! Both my leg of the marathon and the Pikes Peek race are downhill courses. Pikes Peek is known as a PR course as the net elevation drops 190 ft. What surprised me was the elevation change for leg four was only 94 feet, much less than I had expected. Can't wait to kick some butt in next year's Pikes Peek race!

This pic from the start of the marathon appeared in the Baltimore Sun yesterday. Guess I'm not the only one with a GPS device on my wrist!

How funny is that picture, I keep thinking back to Sesame Street and that game one of these things doesn't belong here. Any one else feel that the guy with the white shirt was not going to be in front for very long?

He is almost standing in front of one of the elites, but it might be the rabbit. Falls Road Running put a runner in the front that the news kept referring to as the rabbit. His job was to basically be a pacer for the elites through mile 7 I think. He doesn't look like the rabbit to me though. Also in the news coverage, which you can't see from this picture there is another guy in a white shirt to the far left that took off at what looked to be about my average pace (12-13 min/miles). I was fearful for him that he was going to get squashed!

The paper said that guy was from Crofton, MD, so probably not from Falls Rd. He (guy in the pic) finished 473rd.

usually they keep everyone away from the elites. If I could keep up with them for 1 mile, I would, even if it meant I couldn't finish the rest of the race. Oh, what a story. But alas, I can't do a 5 minute mile, even if it was just for a short distance. The elites are safe for now.

Great job on your pace goal Jeff! I would love an 11:59 pace for any long duration!

The weight loss will come....you will do great.