Heard from my almost 8 year old, Matty, talking to another boy Friday night at the ball park:

Just when you're sure nothing you say sinks in, you overhear this little gem! Deb and I just smiled at each other.

Saturday was a crazy day -- school carnival and baseball game, plus the pre-race festivities. I left right after the game and headed to Frederick, about 30 miles west of home, to pick up my packet and sign the kids up for the fun run. While I was there, I ran into some friends -- Scott, Stacey and Bob -- picking up their packets for the half on Sunday. They wished me well and I was off, avoiding all of the vendors but picking up a few freebies along the way.

I headed to the Team In Training sponsored pasta party where Deb and the kids met me. I learned as the weekend went on, this is truly where TNT shines. As we entered the hotel ballroom, all of the coaches and mentors lined up and cheered us into the room. We joined Terry and Laura, whom I had done some training runs with, along with Laura's husband, at a table towards the back of the room.

Michael, the Director for TNT-Maryland, got up and began by inviting anyone that wanted to come to the microphone and tell their story -- why they were there or who with leukemia or lymphoma had impacted their lives. Dinner was served.

Michael introduced the TNT coaches and mentors. Some we had met before, some we had not, as all of the training groups from the different groups in MD converged for the first time together. At that point, he talked about the diseases and introduced a 9 year old girl whom had gone through two years of treatment. It was quite inspirational to hear her story. (Turns out, Deb went to school with the girl's father.) 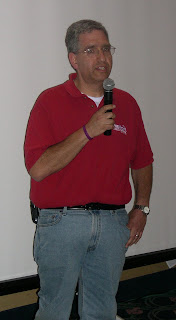 At the next break for desert, I took the opportunity to share my story with the group. I told of my weight loss success and my running for Phyllis.

Soon after, the supporters were pulled into another room where they were given lots of goodies to help cheer on their friends and relatives while the runners remained to get info from the coaches.

There were only a few of us running or walking the full marathon. The Howard County coach, Mohan, talked about the hill at mile 16. I had pretty much been avoiding thinking about that hills on the back side of the course. Deb had suggested a few weeks ago that I go out and drive the course. I really didn't want too much information. No need for even more stress. Since Mohan was my local coach, I asked that he get me up that hill. "No problem -- I'll be there for you, Jeff!" I knew he would be.

We headed home and I just felt stressed. No other way to put it. That hill was now front and center. After a week of wishing the race was "tomorrow", finally it would be.

Can't wait for all the chapters.

Congrats. I can't wait to read the rest, but I have to get working. TnT has great support during the race. I bet you had a blast.