Hope you are all having a great holiday.

We started our day with a little exercise. I spied this Turkey Trot from an e-mail I received from a local running store, Fleet Feet. The family agreed and the plan was set. What a better way to prepare for an evening of gorging than a few miles on the road. I would do the 5-mile run and Deb and the boys would do the 3-mile walk.

Since the day I signed up, the weather had appeared to be a bit iffy, but last night, it looked like we were all set -- unseasonably warm and overcast. The rain looked like it would hold off until later in the day.

After I awoke this morning, I went out to get the paper (to prepare for a household ritual of Black Friday shopping) and it was amazingly warm out. Perfect for a run in shorts and a short sleeve tee. Is it possible that it's late November? Got the kids and Deb up and out the door and we were on our way.

We arrived just after 8 for the 9 am start. I have a tendency to be a bit early for things and today was no exception. We were far from alone, however as the area was filling fast. This event is somewhat loosely organized. They publicize no times and no water on the course and they mean it. The start line, such as it was, was in a residential neighborhood. I'm certain that the weather helped out immensely as the starting temp was 66! They were also helped out by publicizing an appearance by Baltimore Oriole Legend Brooks Robinson, which certainly enticed my kids. Unfortunately Brooks turned out to be a no show. We did have plenty of time for a family photo! 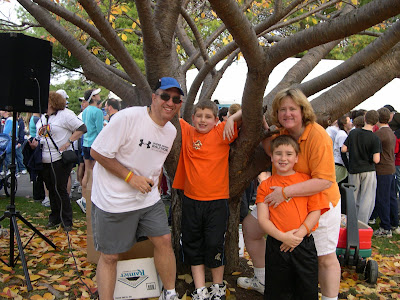 At about five past nine, they sent everyone off with little fanfare. With 800-1000 participants, early running was tough, especially since they set off the walkers at the same time.

The course was VERY hilly, but since it was a loop, tough uphills were ultimately rewarded with down hill runs. After the first 1/3 mile or so, most everyone was in a pace and we were enjoying the weather, the late fall color and the relatively traffic free roads. A few locals even hung out in front of their houses to cheer on the runners.

My goal for the run was to break an hour for the 5 miles. With no official timing, I was relying on my trusty Garmin for the official time. For the first 2/3 of the course, I was able to keep a steady running pace, with one exception as I came close to the top of one of the bigger uphill parts of the course. Time was on my side as I had nearly two minutes in the bank after three miles. Walking about 1/3 of a mile through the last third of the course, I was able to break my goal with a couple of minutes to spare. Ultimately, the course mapped out to 5.17 miles, completed in 59:53, a pace of 11:34. Ending temp was a very nice 72!

Once I arrived back, I went in search of my walking family. I found Deb and boys a short way out from the finish line and I walked back with them. Once we arrived back, we were all in need of water and it seems that the temps and the crowd caught the organization off guard as there was none to be found. So, off we went for a bagel brunch at our favorite bagel spot -- Goldberg's Bagels.

I am immensely proud that we found a healthy way to start off our turkey day! Maybe the start of a new family tradition!

Of course, what's an event without the swag: 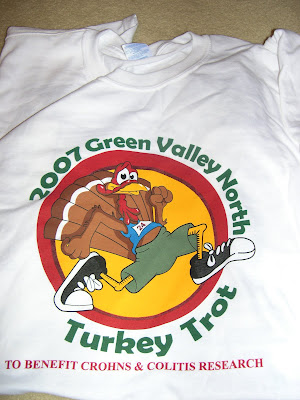 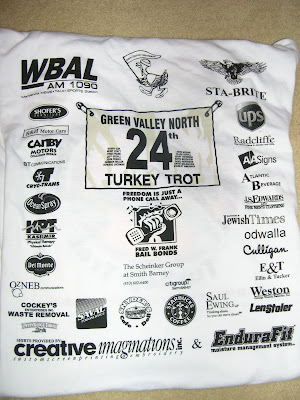 Happy Thanksgiving all! Hope you have or had a great one. Now, off to get some turkey. . .

happy thanksgiving. I wish Brooks would have been a no show in the 70 world series. he's one of the greatest all time 3b's.

congrats on your first turkey trot. It's a great way to start the day.

I would have given my arm for 66 degrees...... our run today was a balmy 24 degrees I think. BRRRR!
Sounds like a great morning with the family.

We had great weather up here as well. Made for a very pleasant run this morning.

Very productive day. My exercise consisted of running outside to check on the meat thermometer in my turkey. Believe it or not, it was warmer in Baltimore than Houston - we topped out at 55.

What a GREAT photo of the family. It is now proudly displayed on top of my dresser with the other family photo collection. DEb and the boys look great. Can't wait to see you all in January.

Very cool shirt! Congrats on beating your goal. It is so great to have the whole family involved in the race, too!
I couldn't find a race in my area, so my turkey trot was in the basement on my treadmill :-)

Who's that skinny dude with the gorgeous family?

Hey, thanks for reading my blog! I see that you had much the same experience as I did. Not the worst race I've ever run, but definitely not the best, either.

Keep up the good work and maybe we'll run into one another at a race in the area. I'm running the Shamrock 5K in March in downtown; you might want to check it out to see if there still spots left.