O, Say Can You Schvitz!

Today was the 5th Annual Survivor Harbor 7 run. I had decided to run it primarily because of the course -- it surrounds the Baltimore Inner Harbor, including Fort Mc Henry. (I was gonna post a link for Fort McHenry, but if you don't know what that is, you might want to check with your local 2nd grader.) Of course, Katie having run it before and planning to run it again, gave me added positives on the course.
As the week was moving on, this weekend looked like it would be far less than ideal running weather. Highs in the mid to upper 90's with equal humidity. Honestly, I was not looking forward to a couple hours of schvitzing right up until I left the house this morning.

Katie was nice enough to pick up my packet yesterday, which turned out to be a good thing as they only had 1500 shirts for 2000 runners. Had I waited till today, I would have surely been s.o.l.

I decided on the ride in that I was just going to do my best to enjoy the day. No thinking about time, no pushing it. Just enjoy it all. We met at the starting line at about 7, an hour before the start. Katie and her dad, along with her friend Towanda, also running today, and her husband Alan, there for moral support.

I got my packet from Katie and distributed t-shirts to the ladies for the inauguration of Blue Crab Running. What's that? Well, some time ago, blogger friends Pat, Lisa and Karen started the Tumbleweed Running Club out in Arizona. Katie and I talked about copying their idea when we ran the B&A Trail Half in March. A few weeks ago, Katie suggested the name and I enlisted my Aunt Debbie to do some artwork. A Zazzle order later and we were ready for today's world reveal. 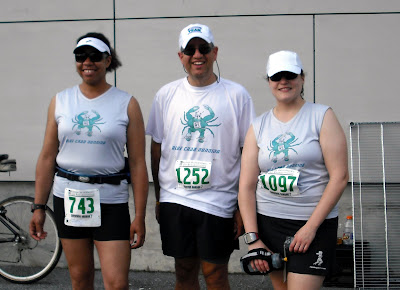 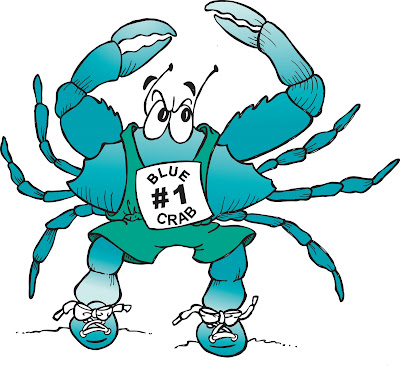 Of course, the awesome artwork. Thanks AD!

Planning for today took a lot of work. We all needed to ensure we were well hydrated. I put on my fuel belt for the first time since I had suspected it had caused an injury during marathon training. For today, I was prepared to stay hydrated, even at the potential expense of having to walk more than I'd have liked. 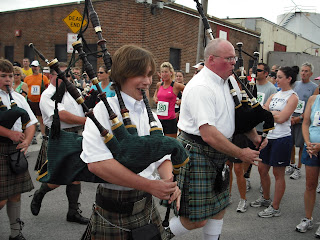 After posing for pictures, we did our thing until just before race time as the bagpipers strode up through the group of runners.

The run started just after 8 am. We were toward the back of the pack, so it was a couple of minutes before we crossed the start line. Temps were about 80 with 80% humidity. It felt every bit that hot and humid, not to mention the hazy skies. As we took off, it was clear that it would be a walk/run kinda day. Not even the slightest breeze evident.

At mile 1, we headed into Ft. McHenry. You might be able to pick out a few cannons in the background in the picture below. It was a very cool start to the run. About a mile around the outer pathway of the fort. I could almost hear Francis Scott Key humming the Star Spangled Banner. 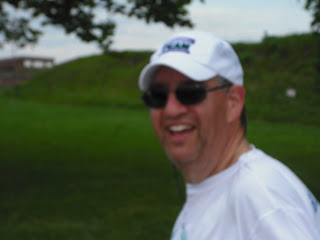 One very nice lady offered to take my pic. Not the best picture, but you can see the hill that the fort sits on in the background.

After leaving the fort, I caught back up with Katie after taking an unplanned bathroom break at the fort and we continued on toward the Inner Harbor. We kept running up until about 3.5 miles when we started taking walk breaks. The humidity was really kicking our butts.

We continued run/walking around the harbor with some great views of downtown. With about a mile and a half to go, I break away from Katie and try to run the rest of the way. Good idea, but not happenin. The air is just too thick.

Approaching Canton Square we get toyed with. We can see the finish, but we're still a half mile from the end. We slog past the finish, around a couple more blocks and back to Canton Square.

Finally and mercifully, the race is over. I finished in 1:28:18 a 12:38 pace. Towanda was about 10 minutes ahead and Katie just a couple of minutes behind. At the end of the day, I really did enjoy the run. I love Baltimore and this was a great chance to see it in a totally different way. 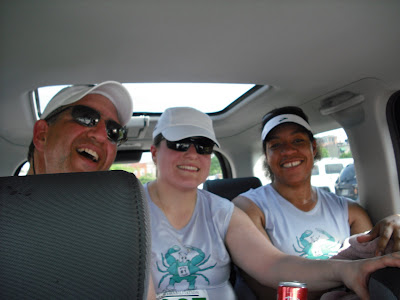 The three of us en route back to the cars at the start line. Thankfully, you can't smell us. I'm thinking I shoulda pitched in for a car decontamination. 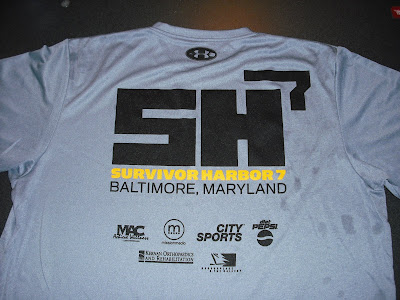 Of course what would a race be without the swag.

Love the shirts!! YAY for a sister running club for the TRC!!

You guys look like you had a great time and the best thing is that once you are in a running club no one cares what you smell like! :>D

The humidity sounds awful but you guys still rocked the race! Congrats!

Sounds like it was lots of fun. You should have stuck the link for Fort McHenry in - think of your foreign fans!

I couldn't really smell us until we dropped everyone off and I moved to the front seat. Then I just turned to Dad and apologized.

Those team shirts are great! I will have to look into Zazzle.

Great race! Glad you had an awesome experience.

Nice job Jeff. I ran at 7 am yesterday and was dying in the heat.

Great job- it was way HOT and Humid yesterday. I wasn't running 7 miles around the city and hated the weather.

I admire your dedication.

Very cool shirts! Hats off to Aunt Debbie for the artwork.

And HOORAY to the three of you blue crabs for finishing the race in that awful heat and humidity! Way to go! Whew.... You can bet I was sitting indoors by the fan.

Did you tell Towanda that she shares a name with Java's bike? :-) I like it. Strong yet beautiful.

Sounds like fun in spite of the heat. Well done.