Kind of a boring title, but it's been a long day. Long couple of days, to be honest.

Yesterday went not at all as planned. It started when I dropped my 2000 Nissan Maxima off at Meineke to have the recently illuminated brake light looked at. I though it might just be the emergency brake, which was feeling loose. A quick and cheap repair.

But when is a visit to the car repair place ever quick or cheap. Seems the brakes and most of the adjoining appendages require replacement. Oh, and by the way, there's something awry with the rear axle. That'll be $2,000.

Not so fast, Mr. Meineke guy. I had decided about six months ago that the next big repair would result in a trade in for something new. (Well, newer.) This was it.

I spent part of the rest of the day looking on line at options and headed out to a couple of dealers right after work. After visiting six dealerships and coming up empty, I headed home.

I know what you're thinking -- what the hell does this have to do with today's ride. Well, I'm gonna tell ya. I was supposed to drive to the the ride today. Not gonna chance the 80-mile drive in a car with no brakes. So, last night, on my way home from Carmax, I called Bryan to see if he could drive. "Ummm, sure, but I don't have a bike rack." No problemo, mi amigo, we'll put mine on your car. "Ummm, not sure if it will fit on my car. " Of course it will. What kind of car do you drive. "One of these:

The day just didn't go as planned. With the car shopping exercise, I finally got home around 8. Dinner close to 9. Bed after 11. Wake up at 4. Not exactly the ideal schedule for the night before a 4 or 5 hour bike ride.

This morning, the alarm went off at 4 and I was up and at em. Got to Bryan's right at 5:15 and by 5:30, I had convinced him that our bikes would be fine on the back of his well kept sports car. We were on our way.

St. Michael's is a quaint little town best known for having a couple of incredible resorts as well as being the home of one former major leaguer, Harold Baines.

The town is on Maryland's eastern shore, which is essentially as flat as the Kansas plains.

After a 90 minute ride where at each bump and turn, we were checking on the stability of the bikes, we arrived at Harold's alma matter to check in and pick up our packets just after 7. This seemed to be a pretty small ride. One of the organizers said about 130 total for the three distances -- full century, metric and a shorter 30 mile cruise. The metric seemed to be the most popular. Our "packets" consisted of a cue sheet and an unremarkable t-shirt. Well, it's a small event, what do you expect? 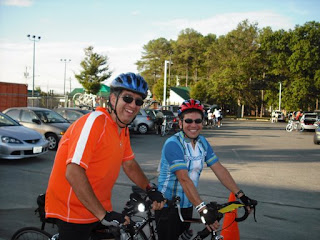 Just about 8, we were off. We started off cruising. I mean really cruising. From the start to the first rest stop, we average 17.8 mph, which is smokin' for us (especially me.) We did do some drafting off of each other and that really helped. We both felt strong and we enjoyed the ride out to Tilghman Island. #1 item learned about riding on flat roads -- speed doesn't suck.
After that first portion of the ride, we headed back along the same stretch of road we originally headed out. Well, now it's not so exciting. the corn fields look kinda the same on the port side of the road as they do on the starboard side. We even muse about missing our home hills. #2 item learned about riding on flat roads -- boar-ing! 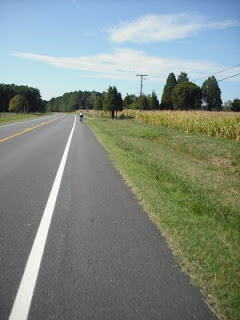 At about 30 miles, my back starts to ache and I'm trying to stretch on the bike. Another 10 miles or so until the next rest stop. Our pace is definitely slower, but we're still moving okay. Bryan is ahead most of this portion of the ride and I'm trying to de-kink myself.

We get to the second rest stop at 39 miles and I'm working out the pain, while tossing down some ibuprofen. We grab some snacks, fill our water bottles and we're about to head off again when my cell phone rings. I look at the phone and it's Uncle Rog. That would be eye-of-Hurricane-Ike-just-passed-over-his-house Uncle Rog. They made it through alive and well.

Now, we're back on the road.

Within a few minutes, a group of four strong guys ride past and I quickly speed up to jump on their pace line. These guys are sizzling at almost 19 mph, and we're just enjoying the ride. After one guy drops back, he gets in front of me, so we're not moving up to take a turn to lead. I'm not sure what the protocol is, but honestly, right now I don't care. This is cutting big minutes off of the south side corn field view. The next guy is not quite as strong, but pretty close. We're hanging on pretty easily, but not for long. As soon as the next switch happens, we're toast. This guy must be at least 20 mph and I can't hold on. We spent about 6 glorious miles hanging on and now we're down to less than 20 miles to go. 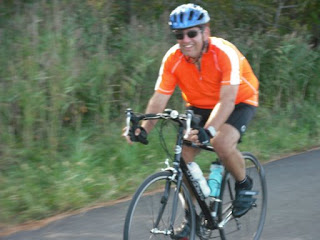 The pace is definitely slower now and I'm struggling with my back aches. As we pass the start at about mile 50, I momentarily entertain the notion of pulling in and letting Bryan finish on his own. That thought went away and we trudged on.

Our final rest stop is at mile 56, where the full century riders take a ferry ride to continue on. (I wonder if the mile or two on the ferry count towards their hundred?) Another opportunity to stretch and we're back off toward the finish.

We pull into the school at about 12:30. Glad it's over but proud of our ride. This was the longest ride for either Bryan or myself by at least a dozen miles.

This was a really good opportunity to experience a very different type of riding than we're used to. Not really about the speed, but when you're riding hills, you've got to move around a lot. You get your hear rate up going up and going down is an opportunity to relax. #3 item learned about riding on flat roads -- you've got to pedal all the time, and it's hard in a very different way than hills.

We got back home at about 2:30 and I was off to Zach's football game followed by reward for the family, especially me! 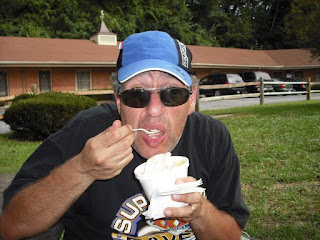 This ride really gave me a lot to think about for the upcoming Seagull Century. Very similar terrain, just another 36 miles of it. I need to work on my back stretches. This is my biggest concern. Seagull is just 3 weeks away.

Ok, first I totally can't believe we both did such a similar ride today! (Obviously I was way, way behind on your blog because I just read back and saw that you talked about this).

Second, do I EVER understand that back pain. OH man, the last 10 miles were brutal today. I also had a little trouble with my pinkie falling asleep on one hand which I don't usually have.

Third, were you starving today? I was! LOL

Nice ride!! So, did the ferry ride count towards the milage?

And good luck with the car. Boo.

Are you going for the Seagull?? That's great! I'm going to train for Tahoe next year (along with that super fun task of fundraising for TNT)

I met the new runners this morning at the first winter season training. I'm mentoring a group that's headed to Arizona, I however am headed to Disney. Mohan told me to tell you he said hello and that the group misses you! I can't wait till it gets cooler.

And, nice photo of you at Soft Stuff! I haven't been there all summer, I'm totally missing out.

I love race report... long short and in between. Me, I'm thinking I need to take up cycling. :)

Jeff you know reading your blog always makes me smile.
Great job on yesterdays ride.
Good luck with the car - yuck - sorry to hear you are having such issues.

Good work - you did awesome.

I love a good race report. Congrats on staying upright and putting a lot of miles on that bike.

I got to get a bike. Mine has no wheels and never leaves the family room.

Congrats :). Very well done. Sorry about the car though :(. hope it works out fine.

Just another 36 miles indeed. I've never gone that far on a bike. I imagine I'd have a real pain n the rear by the end. No?

What?? You stayed on the bike? No visits to the pavement?

I must have the wrong blog....


Be back after I find my buddy Jeff...

Still wondering where all the running is though..... ;)

Thanks for your comment! :) I'm sure with time, my legs will get used to the tortute. I sitll love each and every second of it. No pain, no gain, right?

I had to skim through your post (I'm at work), but am delighted read about your bike ride. I want to train for a triatholon next summer but a)I can't swim (taking lessons now) and b)i haven't touched a bike in years:(

Congratulations on your ride!