What a week. We moved from Louisiana to Texas on Tuesday. Hotels in Houston were tough to come by, but we found a Hilton in Clear Lake, right near the entrance to NASA, southeast of Houston, near some of the worst that Ike had to offer. When I spoke to the manager of the hotel, 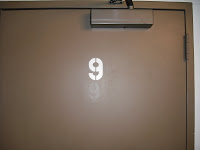 he told me that the only issue is that they didn't have an elevator and wouldn't have one until at least the weekend. There are 14 floors. At this point, you can certainly guess what floor I wound up on. 136 steps from the lobby to my floor. Twice a day on average. Made it into a contest even, 79 seconds best, with laptop bag on shoulder. Not bad, huh?

I had a beautiful lake view from the ninth floor. 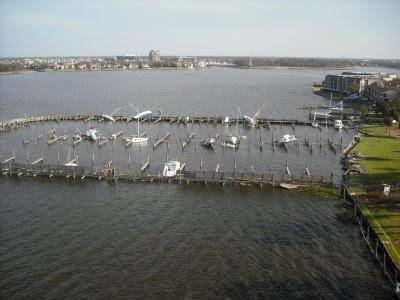 Would kinda suck to have that nice first floor lake front condo with a big ass boat blocking your view. 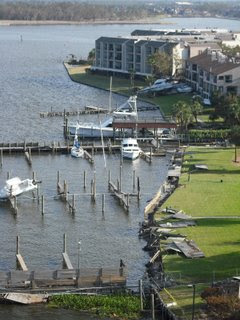 No intention to make light of the disaster, just not used to a view like this outside my hotel window.
While I was in Houston, I hit the 24 hour Fitness near the office. Same fine folks that sponsor The Biggest Loser. Nice place, too.
Made it home late Friday and decided to take the day off. Time to hang with the the family.
Today, I hit the gym when the kids were in Hebrew School, thanks to the third consecutive day of rain. Did 4.5 on the treadmill for my longest run since June. Really a slow run, but I'm feeling more confident about the Baltimore half in less than 2 weeks.
This afternoon we went to the Orioles game. The end of a crappy season, at last! My youngest was determined to win the "Fan of the Game" -- you know, they pan the crowd for the most outrageously dressed fan. Well, whaddya think? 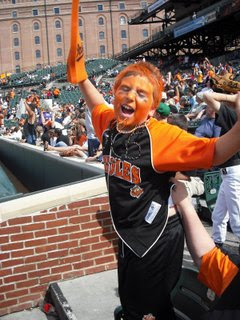 Can't believe he didn't win, but he was our fan of the game! We could believe that the O's tanked again. There's always next year.
It's good to be home!
L'Chaim!
Posted by Jeff at Sunday, September 28, 2008

I love the running up the stairs!

Glad you are home safe and sound. Your Little O's fan is adorable.
Have a Happy and safe holiday this week.

Yeah, I am kind of glad this baseball season is finally over.

The stairs were not that bad, at least you are athletic and can conquor them with the greatest of ease.

The stairs were not that bad, at least you are athletic and can conquor them with the greatest of ease.

Wait, is the the youngest? The same youngest who dancing in a parade on a vacation?

He's becoming quite the ham!

I'm glad the season is over twice. Once for my birthtown Reds and once for the current hometown D'backs.

Glad you made it back home safely.

Jeff, thanks for the pictures from the Hilton. I lived down around there and I just had my 20 year high school class reunion at that Hilton hotel back in August. It is so sad to see those beautiful sail boats destroyed like that.

Sorry we did not get to do a Blogger Peep meet-up.

I'm so happy to have finished while achieving my time goal at the same time. I definitely don't look like the prototype of a runner, but I'm starting to feel like one the more I run. This race really inspired me to keep going :D

Glad you are home Jeff! Your little fan is AWESOME!!! I would have voted for him, hands down! ;)

Hey, that ninth floor stuff is just like competing for Biggest Loser. Quite the workout. What did you win? :-)

Glad you made it back home ok!! That is quite a picture!