We're now 24 hours into the event and it's crunch time. The forecast for Saturday was hot and humid -- expected to be into the mid-80's. Seems like we were getting paid back for the lack of warmth through the early part of spring. Prior to the week before, there was only one day when the locals could run on Saturday without tights. Well, this would change, for sure.
Even during Karen's last leg, we could feel the day warming up as the sun continued to rise over the horizon. Without a doubt the heat would take it's toll on us.
Karen finished her leg and was officially our first cheerleader. No more running for her. Ann Marie followed with a leg that also seemed to defy the elevation chart. As she finished, we moved to the C & O Canal towpath, a flat, crushed gravel, partially shady run. The relay would stay the towpath for most of the remaining legs.
I took the team for my last run for 6.9 miles on the towpath. I had high expectations for myself, given the terrain and the shade. Dressed in my usual Saturday Team In Training duds, I started strong, feeling very good, considering the lack of sleep and miles already run. At the start, there was another runner at about 200 yards and I was slowly closing the gap over the first couple of miles. Then things started to go a bit haywire.
I slowed down a bit and gave back the distance I had made up. At 3.5, I started to feel some pain in my right foot. I slowed again and eventually stopped to take off my shoe. Only thing I could see was that my shoe might have been too tight. I retied it loosely and began a slow jog, but my mind was telling me to walk. I was cursing myself for slacking. 7 miles is not a big run, but my body was arguing back. I walked/ran the rest of the way, intermittently running from one tree to the next to singing 100 bottles of beer on the wall to myself, just to get through the finale. When I finally saw the transition, I was able to kick it into a higher gear, but I was thrilled to be done. On average, this leg was closer to 11 minutes per mile. It certainly felt much slower.
Now around 10 am, you could cut the air with a knife. At each of the next few transitions, there were millions of little gnatty bugs. Almost like mosquito's, but since they weren't biting, I'm sure they weren't. They were just everywhere. You couldn't feel them when you were running, just standing still. Strangely, everyone had their hands straight up in the air. One of the other runners said that this would keep the bugs higher since they go for the highest thing around. I'm sure that there were lots of locals around who got a kick out of this little urban legend. Looked pretty funny to me. And it also didn't work.
Matt handed off to Dan, who handed off to Taryn. In addition to having the monster hills, she was also blessed to have the single longest leg at 8.8 miles. She started running at noon in the heat of the day. Tough leg. She did it though. Amazing.
As we awaited Taryn's arrival, we discussed with Van 2 the need to skip a leg or two. We needed to complete the run no later than 8 pm and, given the temps, now in the 90's, we'd likely be pushing 9 pm. The race official told us that there was only one team behind us at this point. She informed us that everyone must run 3 legs, so runners skipping a leg needed to run a leg with another. Jeff L. gladly gave up his 8.2 miles to run 4.6 with Natalie. Soon after, Cheryl gave up 8.3 to run 6.8 with Juliet. 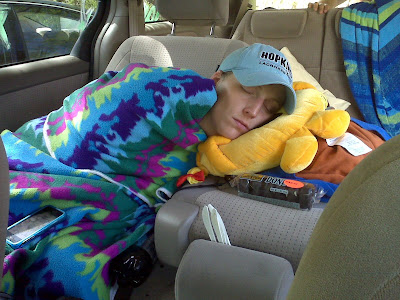 At least one of us got more sleep than the rest.
Once Jeff and Nat were off, Van 1 headed into DC to shower off our three layers of stink.

The plan was to meet Van 2 at the finish line. Unfortunately, the park was more difficult to find than we expected. It had no address so we were trying to get there by feel in between DC traffic and construction. Juliet called me every minute or two as Jaqualin was due in any moment. We finally arrived at 7 pm and we ran through the finish as a team! 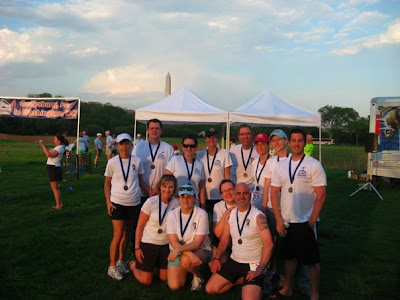 Once the results were posted, it was official: time wise, we finished dead last. Enthusiasm, no doubt we were first.

I'll be back with one more post -- dinner, brunch and some final thoughts.

I still feel I have unfinished business with this relay.

If I would have been on the team you guys would have finished even laster.

You all finished that is the important thing.