No point in apologizing for almost three months without a post.  It is what it is.

The last few months have followed a cycle:  activity, eat well, inactivity, eat poorly, repeat.  There have been at least five failed attempts to get back on track since January, even with more than 600 combined miles of biking and power cycling.  Today, things are back in the good, hopefully for more than until tomorrow.

Yesterday, I participated in my first true multi-sport event, the Texas Motor Speedway Duathlon.  (A duathlon is similar to a triathlon, just without the water.  It's a run/bike/run event.)  I was psyched to get back into an event after quite a hiatus.  I had been doing lots of biking, including an intensive power cycling class and I could begin to see the results.  On the running front, not so much.

A group of friends from the local bike shop all signed up for the event.  I knew the run would be an issue since I had done so very little actual running, but what's a couple of miles, twice.

﻿
﻿ I finished the first run in a reasonable time, 21 minutes and change.  Did some walking along the way, but not too much.

On to the bike.  I had ridden the course twice over the past week, both times with stiff 20 mph winds on the course.  The winds work great on one part of the course, but not so great on another.  Yesterday was the same.  Overall, I was pleased relative to my training rides, about a mile per hour faster.  Then off the bike.

Run number two was tough.  In fact, my calf's were screaming and I was relegated to walking the first half mile until I loosened up.  Then run-walk the rest of the way.  (Well, in all honesty, it was more walk-run than run-walk.)

It's really nice that the multi-sport guru's have a category for fat folks -- for men it's Clydesdale's, women are Athena's.  Gives us a shot at some bling (I guess, maybe some day I'll find out.)  I finished 8th out of 14 Clyde's over 40 years old.  Not bad for a first effort.  Looking at the results, there is plenty of room for improvement on both the run and the bike.

Then there are the pictures. 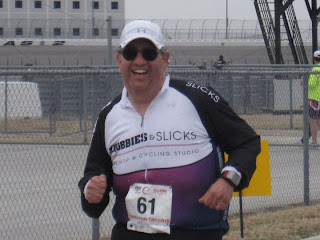 One look at these and I'm instantly reminded of how far I've gone. . . the wrong way.  Have to wonder how that 15 pounds of carbon on rubber holds me upright.  Not a pretty sight, but it's the reality check that I need.  I'm certain now that the bike shop folks are friends, allowing me to grace their jersey in all of my blubbery splendor.  (Notice how I conveniently hid my lower 80% behind the studs and studettes in the group picture above?)  (Photo credits to Tori -- thanks for the reality check!)

Alas, I'm back to where I've been since I moved to Texas, needing to get back from where I came, size wise, at least.  These pictures came with a wagon and I'm officially on it.

Debbie found another du just six weeks hence and I'm in.  It's longer -- 5k/19m/5k -- and I plan to run the runs and do them 15 pounds lighter than I am today.  I'll still be a Clyde, but a slightly smaller version.

You are awesome, Texas Jeff! So inspiring and I really miss ya here in MD! Keep up the good work!! Ride that wagon!

Awesome, Jeff! You are an inspiration. You are out there doing the work. Way to go on your first duathlon! I have yet to do even a 5K, and have done nothing but sit on my behind all year. You make me want to get moving! :-)

Very proud of you Jeff! I'm doing the next one too! and of course Tori will be with us :) if you want a running partner or anything let me know!

We all have our ups and downs. Time for a major shift for you. I know you can do it. I read a few months back that weight loss is 70% eating right and 30% exercise. I think it might be even more lopsided. But, knowing that has really helped me. I've been doing low carb since Nov 1 and have lost about 30 lbs. Keep working hard, I know you can do it. I have a new blog at pmonahan.tumblr.com

Jeff - great job, Keep up the good work. Miss you